Ride Through The Country. 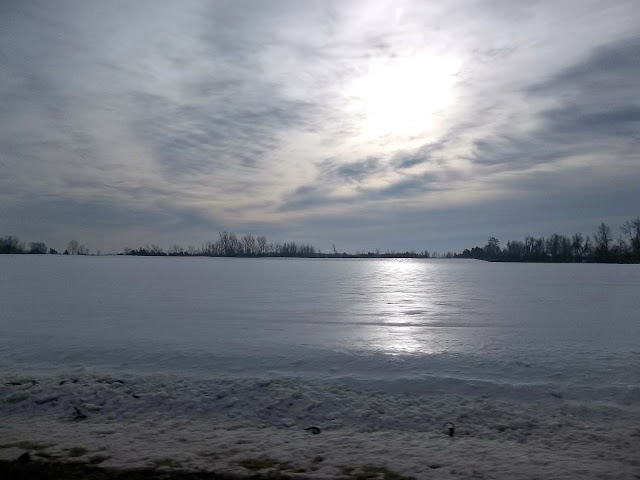 After a few hours of smelling paint fumes on Friday we decided to get out of the house for awhile. I always like to have apples around the house for eating and baking. I noticed we were running low and as I was perusing Campbell's Orchards website I saw they were having a buy one, get one free special. It is only a 10 to 15 minute drive away so off we went. The country is very pretty along Rednersville Road where they are located. A mix of very old farms, new houses and everything in between! It was another dreary day with peeks of sun. 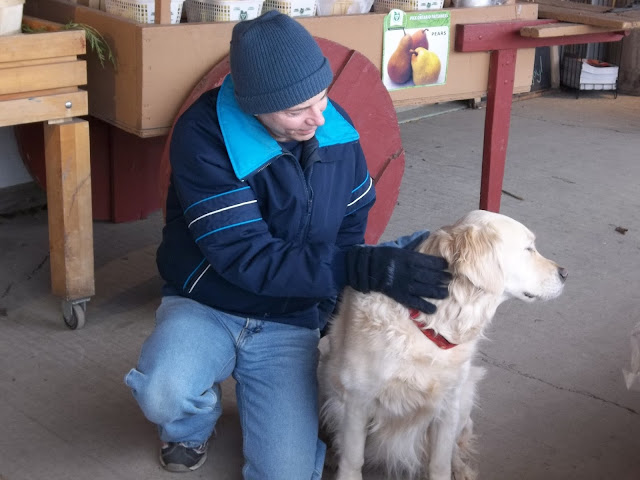 When we pulled up in the parking lot we saw no other customers were there. We proceeded into the store and were immediately greeted by Sophie the Lab. She came running over for a cuddle. I spoke to one of the ladies inside the store about the special and found out what was involved. We went back outside and were able to pick all the apples ourselves and bag them up. Sophie followed behind. As I was bagging the apples Chuck cuddled with Sophie. 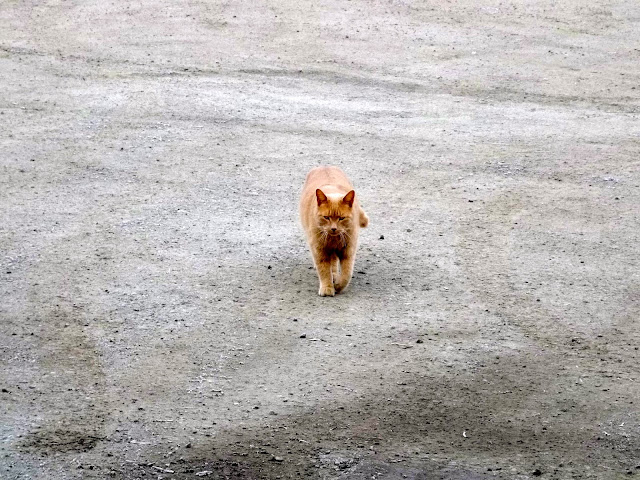 I could hear a cat meowing and turned around and Mac was running across the parking lot from his house across the street. The owners, the Campbell's live in a beautiful farmhouse on one side of the road and their orchards and store are on the other. Mac had a twin brother Tosh (Mac and Tosh, it took me a few seconds to get it!) who sadly was hit by a car last year. 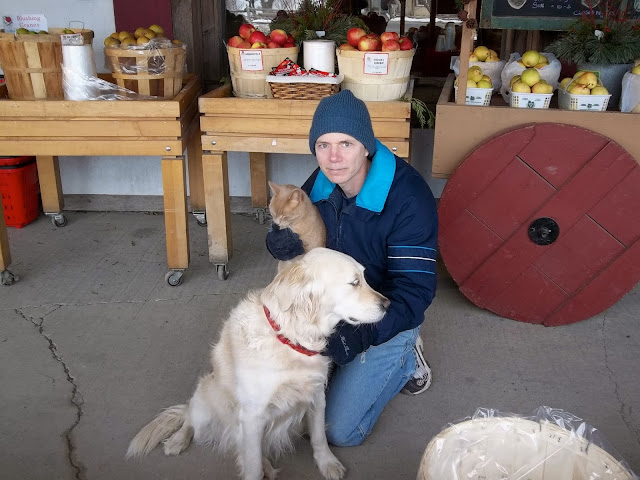 I gave Mac a quick cuddle and went back to bagging apples. He climbed right up onto Chuck's lap and was purring his head off. I finished bagging and weighing the apples and went into the store to have a look around and pay. Chuck stayed outside with the critters. 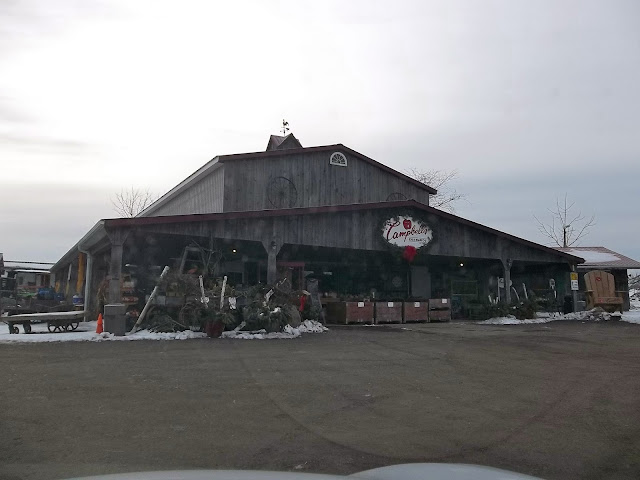 As I was paying and chatting to one of the ladies the store door burst open and Chuck, Mac and Sophie dashed in. It was so funny, the ladies and I laughed! It was getting rather chilly so they all had decided to come inside. 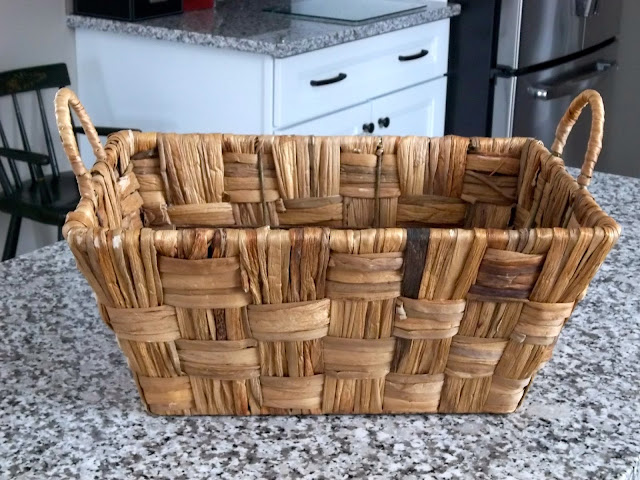 Campbell's were selling off all their baskets they had used in the store for $5.00 each so I grabbed this one to use for our hats and mitts. Just the right size. Yesterday with the apples from Campbell's I made a large batch of applesauce, half I froze and half we are eating now. 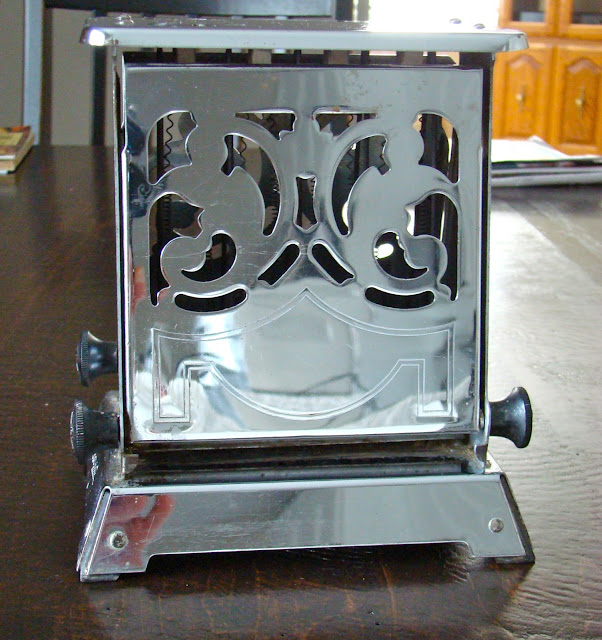 Do you recognize what this is? Up until a couple of days ago it was our only toaster. I bought it at a yard sale 25+ years ago and we have used it ever since. It is from the 1920's. My Mum remembers using one just like it at her grandmother's. Well, for the last six months or so when you plugged it in every once in awhile it would make a "ZZZTTT, ZZZZTTTT' noise. No big deal, to me anyway! Chuck heard it the other day and pulled the plug. I love my toaster but it really is no longer safe. So we bought a new toaster. It was heck trying to find a basic toaster! All we need it to do is toast bread. Finally found one for $24.00. I somehow doubt it will last for almost 100 years as this one did. I will miss burning my fingers as you flip the toast! I didn't throw the toaster away. Chuck is looking online to get parts to fix it. 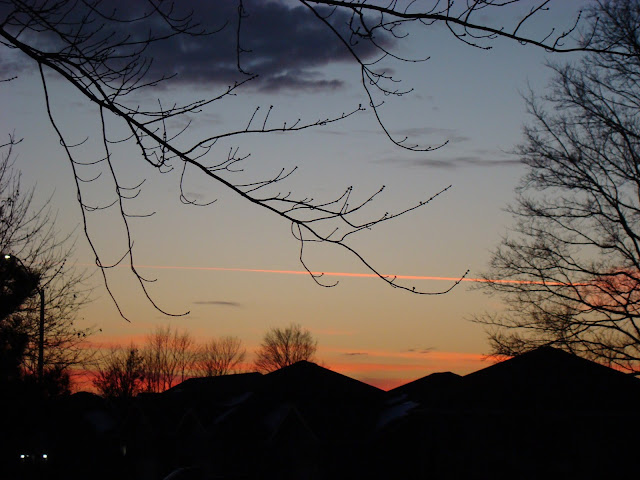 Incredible sunset a few nights ago. 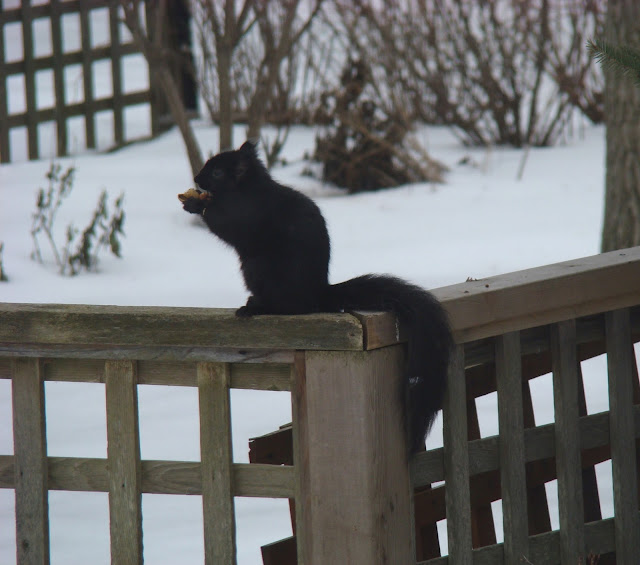 Tippy is a daily visitor. He comes pretty quickly to the feeders after I fill them. Here he is enjoying a peanut while sitting on our neighbours fence. 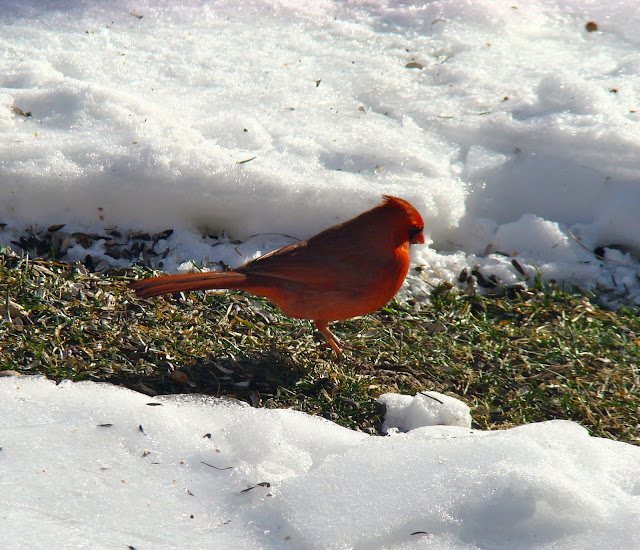 Another cardinal photo from the last sunny day. So beautiful!

We don't have much snow left after a day of rain today. We are supposed to get quite a bit of rain and wind today and the temperature will be heading down. It was lovely while it lasted.

Take care and have a nice Sunday!
Robin