"Marching Through The Fog" 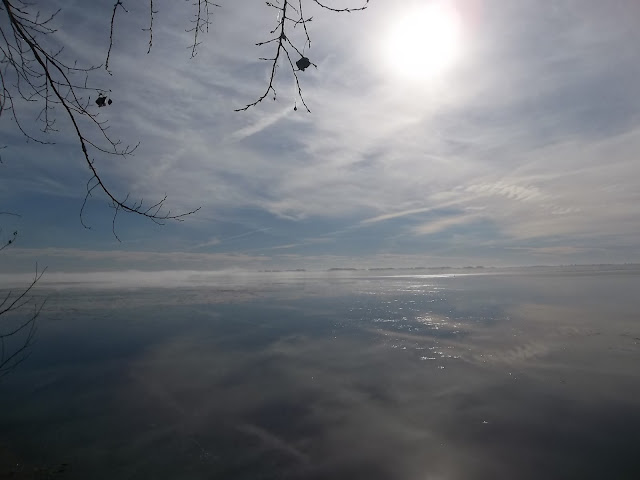 Yesterday was a day of errands here in Brighton and then in Trenton. As I was catching up on the news a Fog Advisory came up for our area. I popped my camera in my purse and headed out. After finishing my shopping in Brighton I headed to Trenton. There was a bit of fog in some of the fields but nothing too bad. I heard later from Chuck that when he left for work at 6:30 it was quite bad. It reminded him of the fog we had when we were living in Nova Scotia.
I drove down to Centennial Park and parked right by the Bay Of Quinte. This was the sight that greeted me. That is Prince Edward County in the distance. 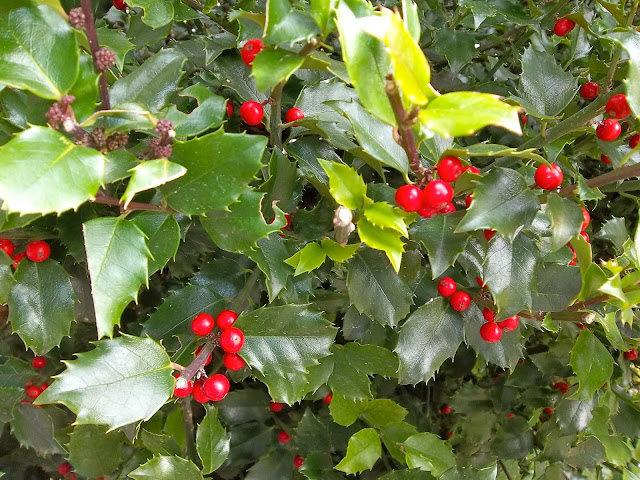 By the time I finished my errands it had turned sunny. After lunch I headed outside to see what was still flowering in the gardens. This holly was very overgrown when we moved in. Chuck cut it back quite a bit and it rewarded up with new growth and an abundance of berries. 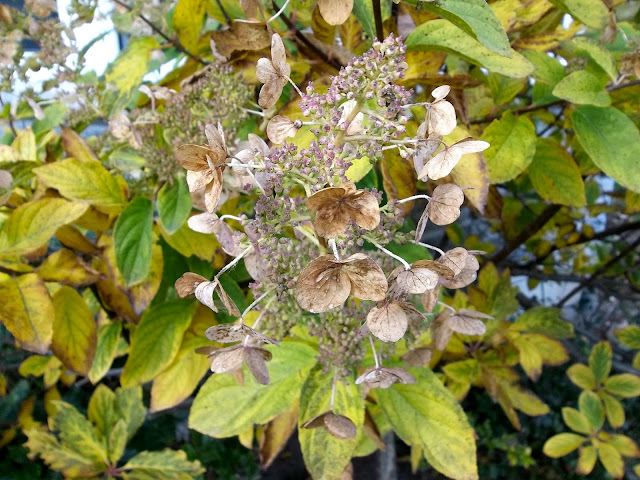 The hydrangea is pretty well finished. I believe it has been blooming since the end of July. 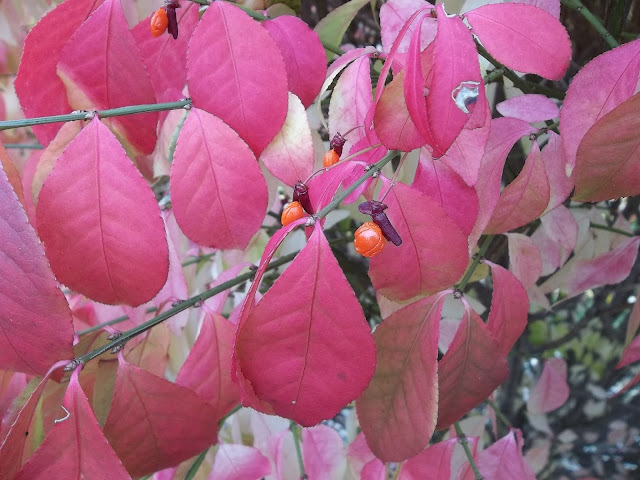 We have two Burning Bushes in the front yard. They don't look like much for most of the year but for two weeks in the Fall they are gorgeous. 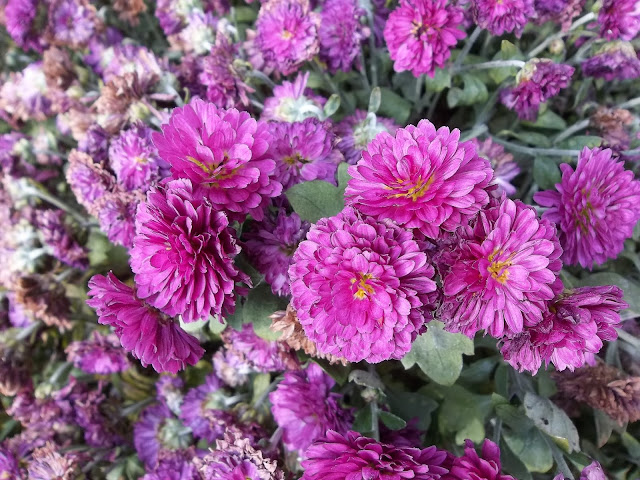 My big pots of purple mums are just about done. They will shortly go in the compost. 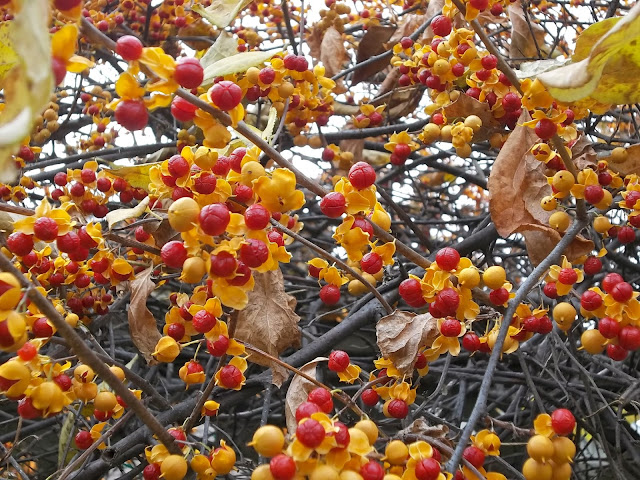 This Bittersweet vine hangs over the fence between us and our neighbours Merv and Marina. Over the last few weeks Merv and I have been filling up my gardens with plants from his gardens. He wanted to thin many of his perennials and we were the lucky recipients of all the plants. The birds (and Sweet Pea) love to hide in the vine. 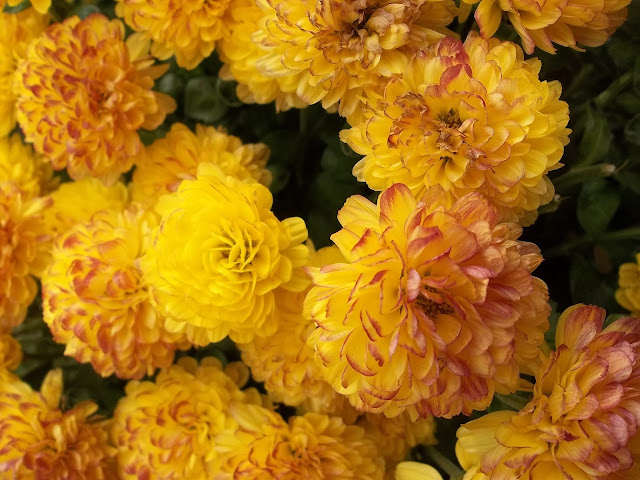 My yellow hanging basket of mums is still blooming nicely.
Merv did tell me what this yellow pine tree was that resides in another neighbours yard but I have forgotten. It hangs over the yards especially Mervs and he doesn't care for it. The needles don't break down and they clog up his beautiful koi pond. 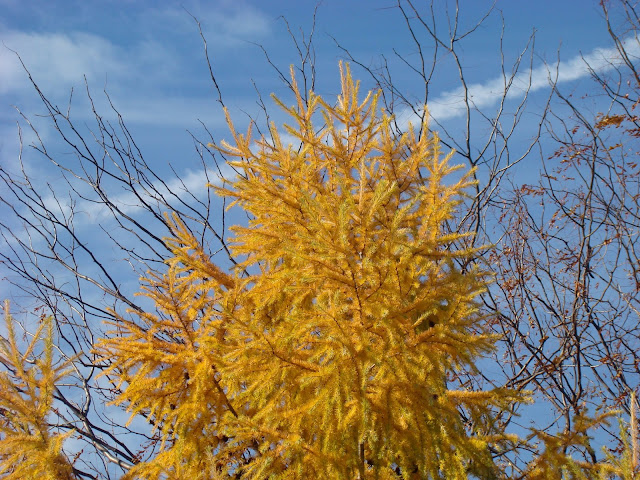 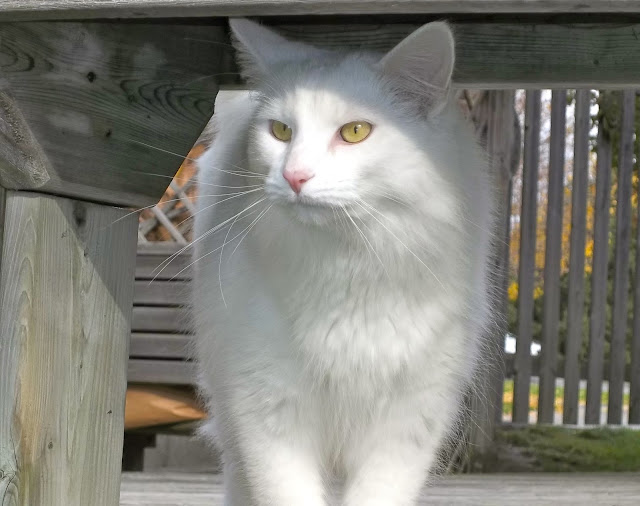 Snowball kept me company pretty well the whole time. She is very sweet and gentle for such a huge cat. She stretched up on my leg and I thought my jeans were going to get shredded but she just very gently tapped my leg. 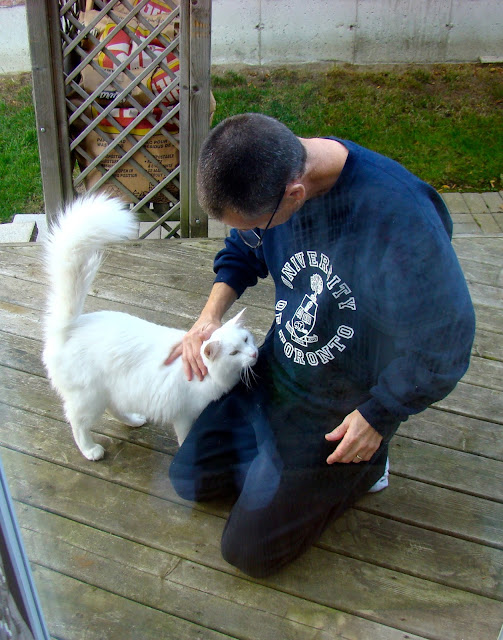 But her real love is Chuck. She stood at the sliding door meowing until he came out. She snuggled right down in his lap and kneaded (love pawed, making biscuits etc….) for ten minutes or so. She never once showed her claws. 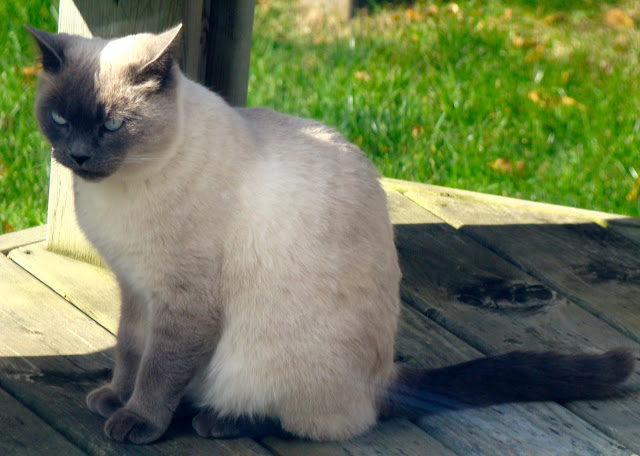 Miss Kitty looks just disgusted with all this lovey-dovey business! 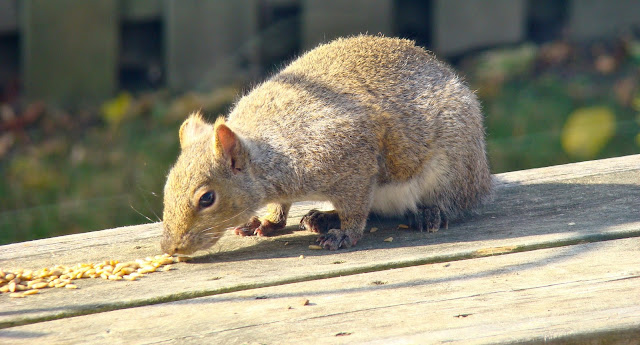 All the squirrel wanted was more sunflower seeds.

Chuck's work schedule has been finalized. He is working Tuesday, Wednesday and Thursday mornings. So that leaves us lots of free time. This afternoon we are heading to Christmas at Presqu'ile, a lovely arts and crafts show. Hopefully I can take some photos!

Have a wonderful day!
Robin