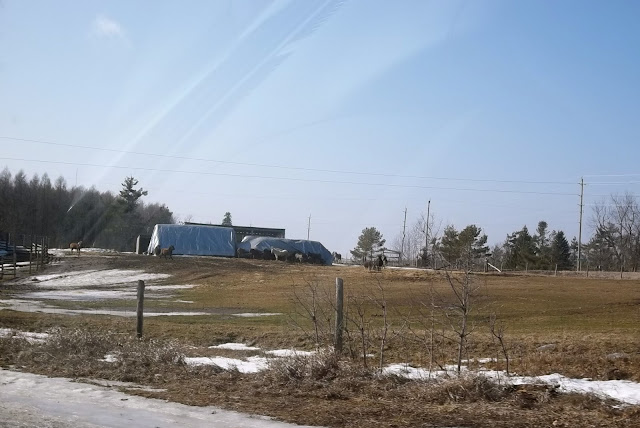 You may remember I mentioned in my last post we were planning a road trip for Thursday if the weather was good. Well, we couldn't have asked for a nicer day! A little drizzly in the morning but by noon the sun was out and it was around 60F. Our destination was PrimRose Donkey Sanctuary in Roseneath. Owned by a lovely lady, Shelia Burns with the help of around 23 volunteers. They take in abused, neglected and aging animals, primarily donkeys. Every Thursday and Sunday afternoon they have an open house so people can come and see the animals and learn about them too. 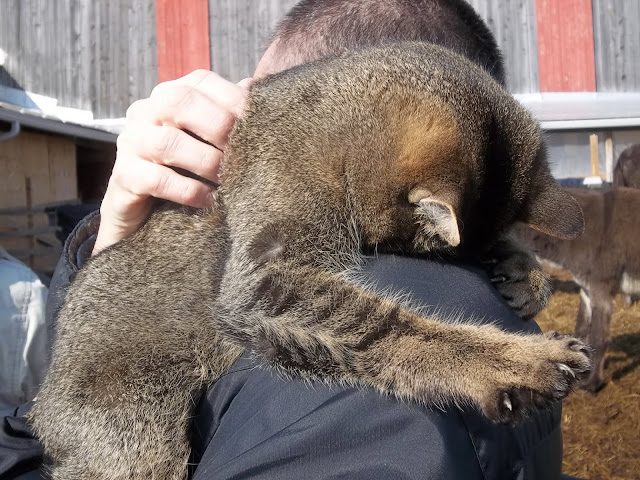 As with most farms there were a few cats around. We had just started the tour and were standing beside a fence to meet one of the donkeys when Cleo the cat jumped up onto Chuck's shoulders. There was no way she was budging so Chuck carried her around for most of the tour. 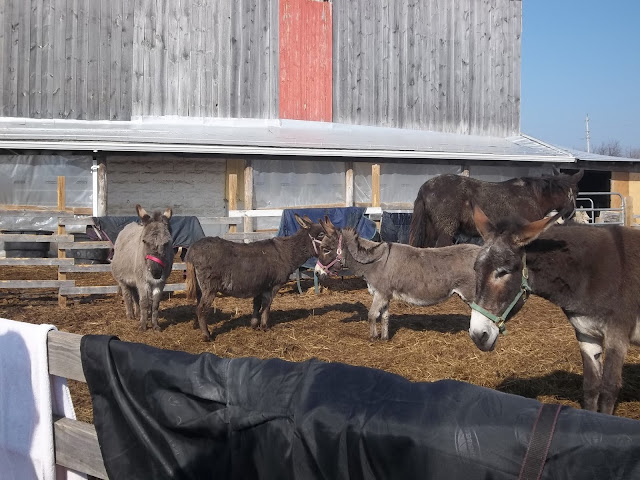 I believe they now have around 20 or 23 donkeys, It was hard to count as they were moving around quite a bit enjoying the sunshine. The donkey on the far right with the green halter is blind. He has a donkey friend that watches out for him. The large mule is the background is Molly. 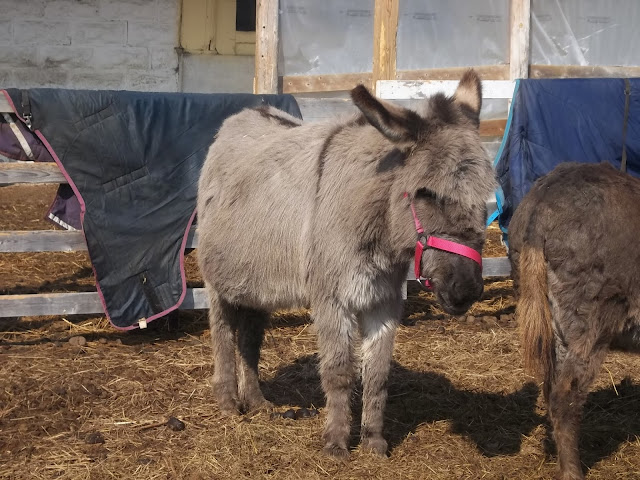 This is PrimRose. Shelia adopted her 21 years ago and started the sanctuary then. She, PrimRose I mean, is 43 years old. According to our guide Chris donkeys can live to be 50 years old. 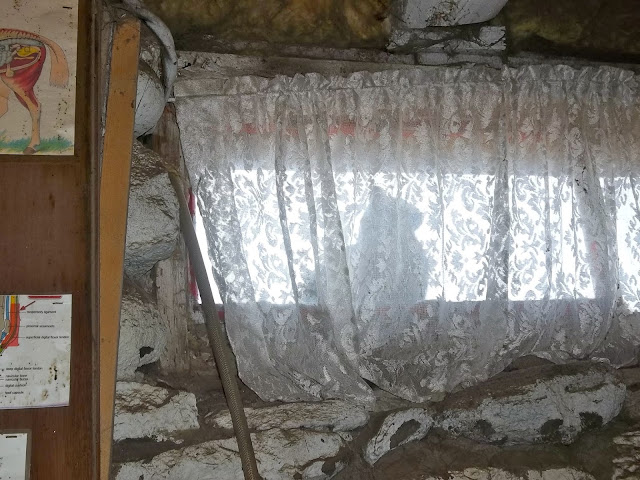 We then were led into the barn which was quite large. It was built in the 1870's I assume along with the house. To be honest I didn't even notice the house! Which is VERY unusual for me, I was too busy looking at the animals. 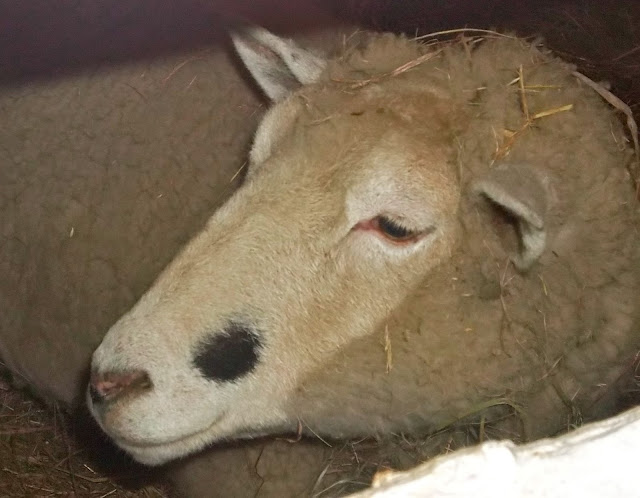 There were only three animals in the barn as it was such a beautiful day . I believe this sheep was having a health issue along with a goat in a coat that was sharing her stall. Down the barn a bit was a large pig named Ruby. She is blind so spends much of her time in her stall. She does have her own little pig yard but she doesn't use it much. 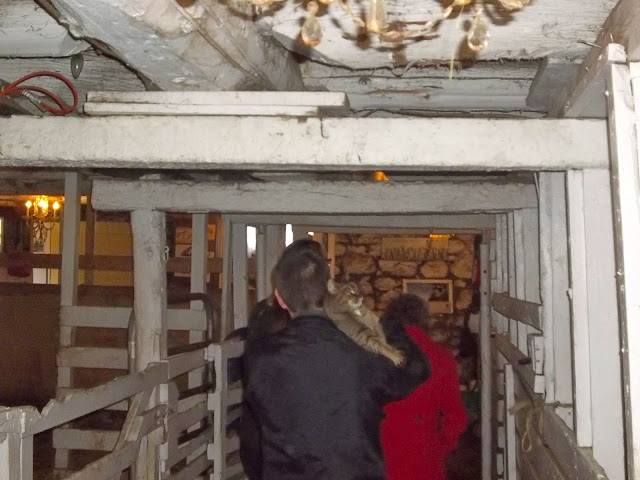 The barn was lit  by chandeliers and as Chuck said "Every conceivable kind of light fixture" (electrician don't you know!) Cleo was still along for the ride. Two other ladies were there for the tour too. 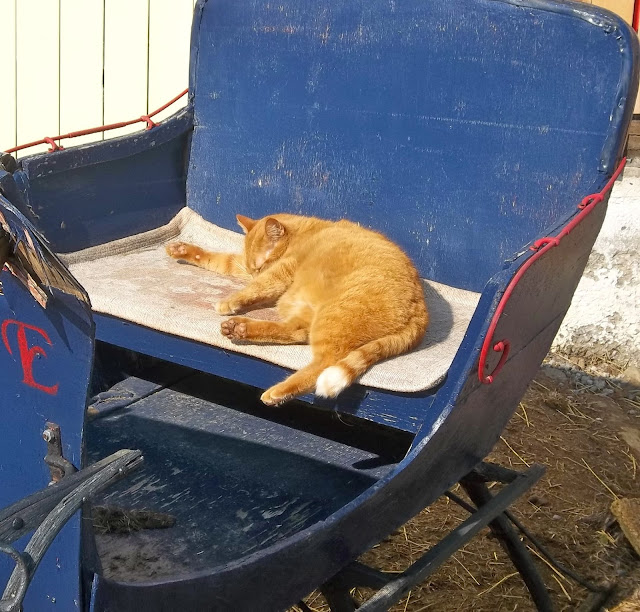 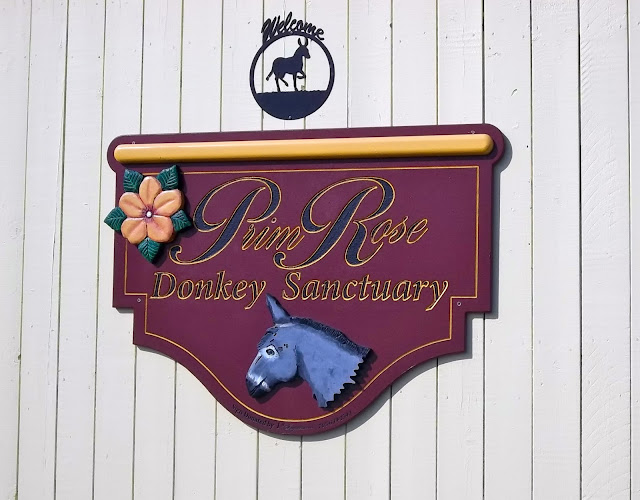 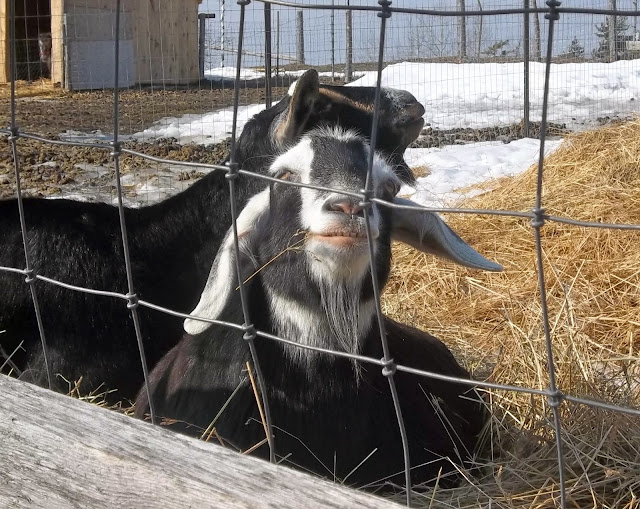 This is Vanna the goat. She was named that as she always smiles like Vanna White. 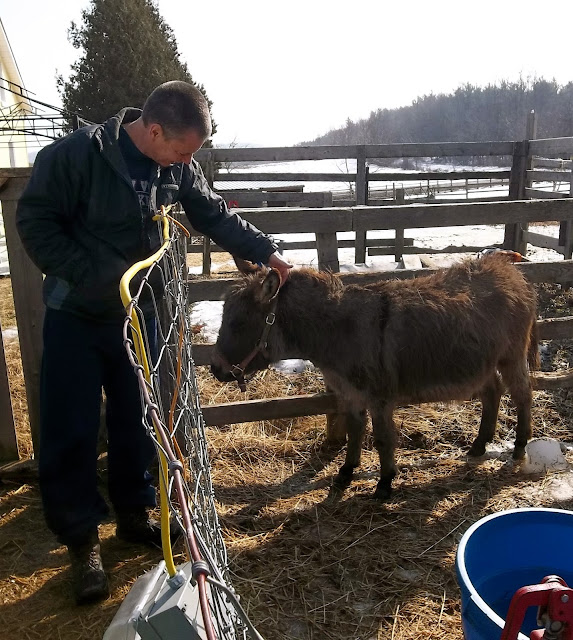 Chuck with Phil the miniature donkey. By now Cleo had run off in search of food. 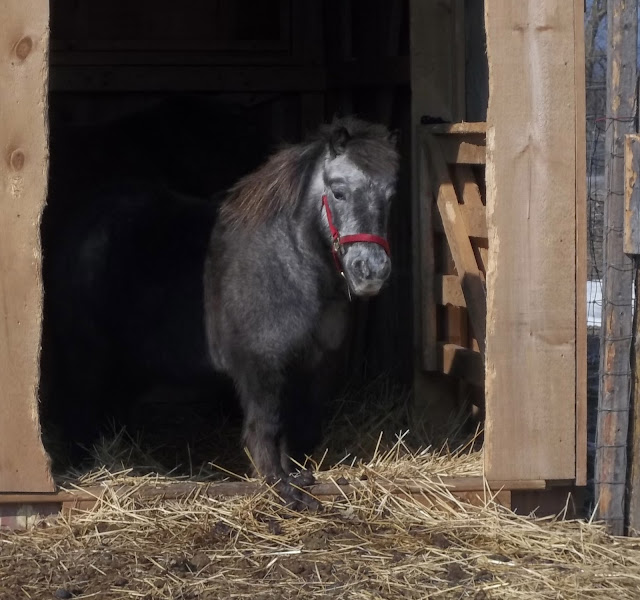 This poor little guy was recovering from a leg injury. This was his first day outside in  a week. Behind him in the little barn were two of his friends. Chris the tour guide stated they had been miserable being separated and had been hee hawing back and forth quite a bit to each other from  the fields to the barn. 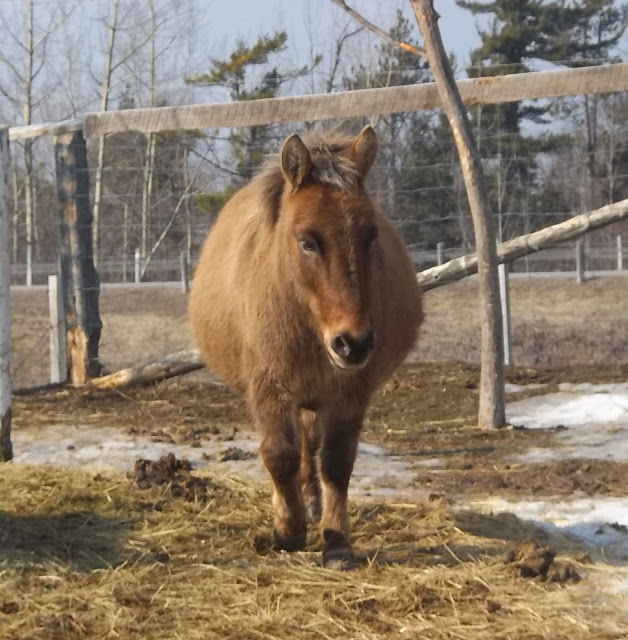 This is Gordon. He was very friendly and came over to the fence to visit with us. 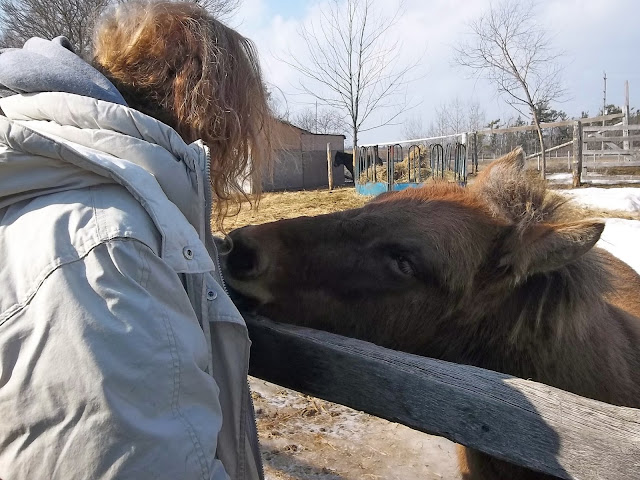 Here is Chris our tour guide. Gordon was snacking on her jacket. He had ripped off one of the pockets the day before. 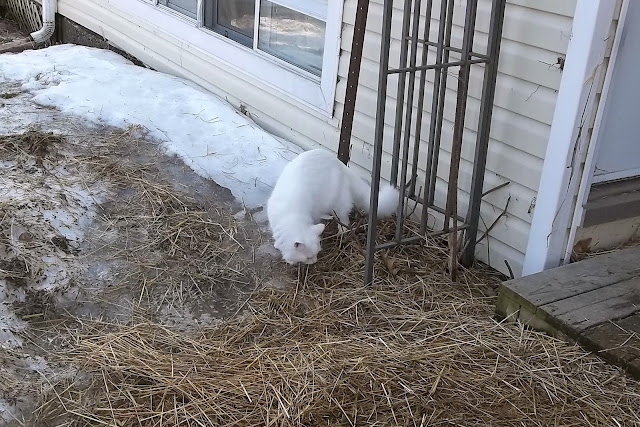 I've forgotten the cats name. Apparently there are two of them that look exactly alike right down to the six toes on a couple of their feet. 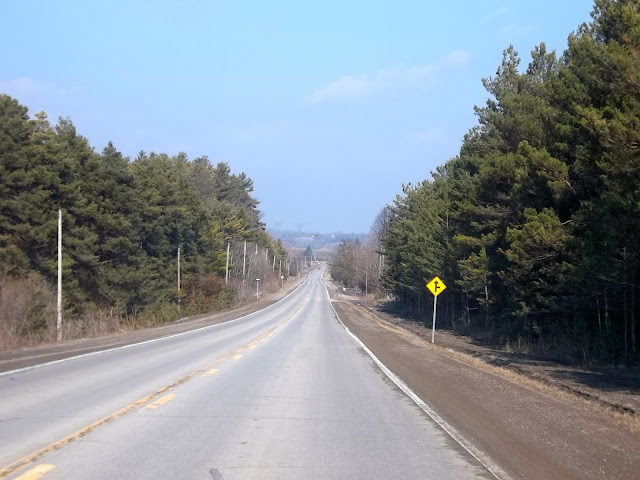 We spent about an hour there visiting. I brought along a case of cat food and we also left a donation for the donkeys care. We will be back! Heading out of town we decided to go the "back" way home through all the little towns and villages. Not much snow left up here! 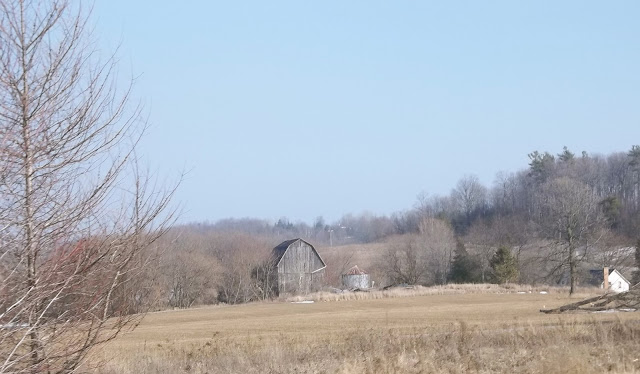 So many beautiful farms and lots of horses and cows. A farmer we spoke to said they really hadn't had much snow this year. He was worried about his well and the moisture in the soil. 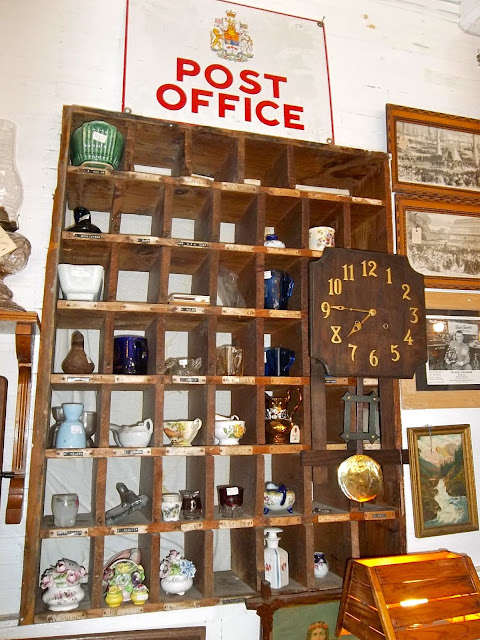 We stopped in Morganston (I think!) at an Antique Store. It was housed in the old Post Office. There were two of these shelves built in the back wall with all the town residents names on the cubbies. It was run by an older gentleman with very reasonable prices. We will be heading back there too. 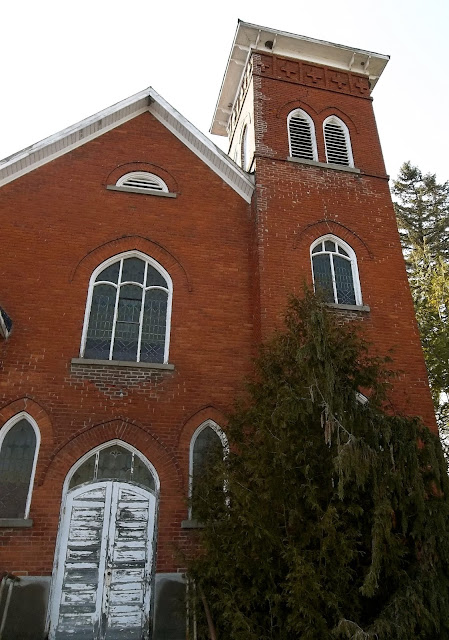 Beside the Antique Store was this empty Church. The stained glass windows were beautiful. 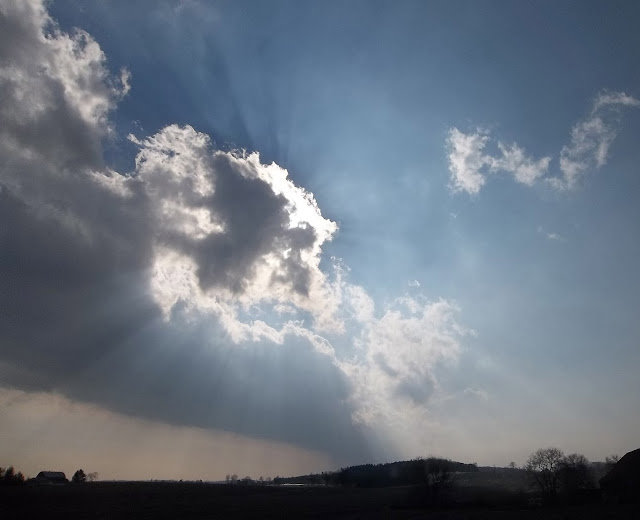 A wonderful afternoon ended with a lovely sunset over the hills.

I hope you enjoyed the photos. Sorry so many of them!
Oh, by the way if you are on Facebook PrimRose Donkey Sanctuary is there too. They put great photos in, including (hopefully!) the first one with Chuck and Cleo. Check it out if you get a chance.

Take care and have a good weekend!
Robin